Presidential Teleprompter for a Noble Cause

While on the previously mentioned shoot (wherein I made a fool of myself, but still maintained my work ethic), I received a call from the Executive Assistant to former North Carolina Senator Elizabeth Dole. Mrs. Dole had a speaking engagement in the coming days, and wanted to make sure she was on top of her Teleprompter game. After speaking for a short time on the matter, I was scheduled to assist her in rehearsals for the following day. I arrived at the Beverly Hilton to meet with Gia, her assistant and confidant. Gia showed me to the room where we were to be working, and I immediately set about assembling the system.

Within about 20 minutes, I was fully set up, and just needed final touches. A few minutes later, Gia brought Senator Dole in. To say she was an absolute lady would be an understatement. She was charming, pleasant, eloquent, sharp, and an utter pleasure to be around. After exchanging greeting and a few brief prompter related questions, we were up and running.

She was speaking on behalf of the aptly named Elizabeth Dole Foundation, a  group designed to help the Caregivers of our Wounded Warriors to cope with legal and financial matters. To hear her speech was moving to say the least. Interspersed between the recognizing of various supporters were anecdotes from her life, humanizing her and showing a fun and mischievous side that we don’t often get to see of public figures.

As we rehearsed her speech (20 minutes), we would take breaks to adjust tempo, clarify points and change words. If she was out of practice with the Teleprompter, I’d never have noticed. She is a fantastic orator, delivering her speech with almost casual grace. Between runs, while she rested, I had the chance to speak with her on life, America, and everything. It is an experience I will always look fondly to. After a few hours, she was fully confident in her abilities, and called it a day.

To Gia and Senator Dole, thank you for the experience. It was a great pleasure and honor to work with you. 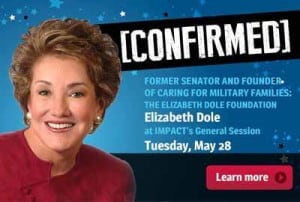 Thank you for visiting LA Teleprompter, your teleprompting specialists in the Los Angeles area. Having worked with numerous A list clients, we are able to assist you in making your production an overwhelming success.

From a 4 page monologue, to a 50 page script, LA Teleprompter has the experience and the ability to tackle the unique needs of your production. Our Teleprompters are capable of fitting all types of cameras; from DSLRs, Mid-range cameras (ie AG-HVX200), to the larger professional studio cameras. Our clients depend and rely on us to deliver the professional quality that they have come to expect.